On Saturday, August 4, former Philadelphia Eagles safety, Brian Dawkins was officially inducted into the National Football Hall of Fame.  For every man who plays or coaches the game, this is the goal- to be immortalized into football history.  To know that for all time, the game of football was forever changed because you had a role in it.  It is during the induction ceremony that players are invited to come on stage and give a speech that often includes their stories and pays homage to those who helped them along the way.  It is during these speeches that we often hear personal tales of struggles that we wouldn’t have known otherwise unless we know the person himself.  This was the case with Brian Dawkins.  All Philadelphia fans LOVE B.Dawk because he personifies the spirit of Philadelphia.  He was small for his position but he never let that get in his way.  And his energy that he brought to each and every game was electrifying enough to set the entire stadium, and those watching at home on fire!  It is safe to say that without his contribution to the team, we wouldn’t have the Super Bowl championship team we have today. 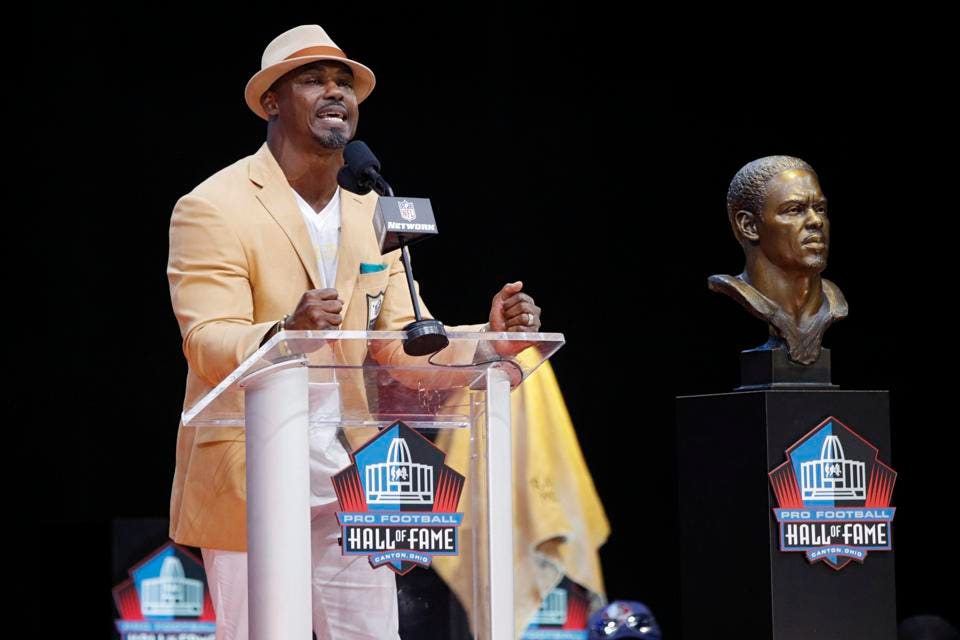 Brian Dawkins speaking at the Pro Football Hall of Fame during the Induction Ceremony on August 4, 2018 in Canton, OH.  Photo by Joe Robbins/Getty Images.

For all the positivity he exemplified on the field and in front of the camera, one never would’ve guessed that even Weapon X, as he is so affectionately called in Philly, was suffering on the inside.  For years, Brian Dawkins suffered from depression.  He admitted that it got to a point where it was so bad that he was past considering suicide, but rather was planning how to go about it.  It wasn’t until he was urged by those around him, including his family and his coaches to seek professional help.  He admits that things can still get hard for him, but with the love and support of his family and the grace of God, he is able to power through.

To admit to suffering from depression is a difficult thing to do.  For years, especially in the African-American community, mental illness, disabilities, and other special needs have been stigmatized.  Mental illness is one of those things where the person dealing with it is often blamed for their situation.  It is something is either made fun of by others, or completely ignored.  Those dealing with it often do so in silence, without getting much help or in an attempt to ignore their symptoms, keep themselves so busy that soon the world becomes too much for them to handle.  And unfortunately, we see all too often what can happen when that becomes the case.

Our history as African-Americans in this country contributes much to the stigma we have in our community about mental health.  It wasn’t too long ago that African-Americans were not allowed to go to the same hospitals or receive the same kind of care that Whites were allowed to receive.  We were also used in experiments that went horribly wrong (look up the Tuskegee Syphilis Study).  Racism and hatred made us third class citizens without many basic human rights and as such, we didn’t trust the medical professionals around us to treat us right.  So we turned to God, as we always had.  God was the hope we needed to get through the hell that was our reality every day.  But then our faith somewhat blinded us when it came to getting help.  This in turn led to the belief that Black people don’t go to therapy; that it was suffice to just pray one’s problems away.  While it is necessary, in my opinion, to have God in your life and to trust Him with everything, God has also given some people special skills to provide help to those who are ill.  This, my friends, is called therapy and it works.

We have to erase this stigma.  It is a fact that 16.1 million adults suffer from at least one episode of major depressive disorder.  It is the leading cause of disability in the United States for people aged 15 to 44 years old.  Too many people have gone too soon because they were not able to reach out for help, either because they didn’t know how or possibly because they were discouraged from seeing the dire reality of their situation.  There is no shame in mental illness.  None.  And the more we talk about it, especially in our community, the better, the healthier, and the more whole we will be as a people.

And so I want to thank Brian Dawkins today.  I want to thank him for being honest about where is has been because there are so many other people who might be dealing with the same thing.  In admitting his struggles, he opened up another door for the conversation to continue about how important it is to nurture not only one’s physical self, but also one’s mental self as well.  And quite honestly, it is possible that in him speaking his truth, he might have encouraged someone else to seek the help they need about theirs.

Don’t compare your behind the scenes to someone else’s highlight reel.  Even if someone you know seems to have it all put together, you never really know what they are going through.  Check on your friends and family.  You never know; you might be the light they need in their darkness.  If you are going through darkness right now, know that it is OK not to be OK.  There is no shame in getting help so that you can be the best you God made you to be.  It’s okay to pray about it, and then pick up the phone and talk to someone who can help you.  Self-care is the best care.

Robin is a 30-something mom of 3 little mischievous, most loving rascals and wife to one of the best cartoon artists who doesn't know it yet. She is (secretly) planning to write a great American novel one day but for now, she works hard at the day job to pay the bills. She loves to run around in circles, eat carbs, read lots of books, and write anything and everything that creeps into her mind. She also loves fun music, fun movies, and holds an appreciation for the theater. ...writing in the third person is fun, too! View all posts by Robin

Join 114 other subscribers
Follow The Blackbird's Compass on WordPress.com